The Rise of Red Balloon

Tarriona "Tank" Ball sits down to discuss the newest album of Tank and the Bangas in this NOLA.Today Exclusive 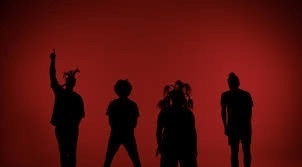 Charismatic, authentic, and insightful, Tarriona ‘Tank’ Ball is every interviewer’s dream. On May 4th, NOLA.Today was honored with an exclusive interview on Red Balloon, the most recent studio album of New Orleans’ own Tank and the Bangas, which dropped nearly one month ago today. We sat down in the editing booth in the Bangas’ studio in the Ninth Ward to get the whole story on how this latest masterpiece came to be.

Talking of the album’s release date, Ball muses, “It sounds like a horror film, don’t it? ‘Friday the 13th. Red Balloon. Grab the blood!’”

Tank and the Bangas are known for their bright colors and animated stage presence, helped along by Ball’s vivacious style of performance and the veritable army of character voices at her disposal. The group’s sound has been likened to gumbo in how it marries a variety of genres into something delicious and wholly unique. “I know fans all over the world, but especially in New Orleans, are excited to hear what we’ve been working on,” says Ball. “Especially because we’ve been dropping nothing but that fire when it comes down to them singles! From Big, to Why Try, to Stolen Fruit to No ID… All beautiful.”

Each of these singles, released over the months leading up to the album’s release, were definitely something spectacular, and all appear on Red Balloon. The complete album builds on these singles, resulting in an R&B-inspired masterpiece greater than its pieces. In our conversation, Ball describes this picture as one of ascension. “We originally conceptualized Red Balloon as a dual disc release with Green Balloon,” she recalls, referencing their previous studio album which dropped back in 2019. “But we were thinking, how about we wait some years and see… our maturity level, our experiences, just see how we grow? But we always knew there was going to be a green and a red. And it was super intentional with Green Balloon that we mention ‘green’ a lot throughout the album and drop little Easter eggs of the red coming. Like, the last track was ‘Colors Change’, to let you know that things were gonna change soon. And also, ‘The flavor of the day is red! No, it’s not, it’s green!’ There was a lot of that, just little things just to let people know, it’s coming. Because we always knew that it was.”

In addition to being the front-person of Tank and the Bangas, Tarriona Ball is one of New Orleans’ most iconic slam poets. Much of her discography is gleaned from her poetry, thus there’s an obvious amount of love and story that goes into each song. This was certainly the case with her song Hot Air Balloon, from which both Green Balloon and Red Balloon derive their titles. “Honestly, when I first wrote it, I thought that it just sounded fun. It sounded curious, it sounded airy, it sounded childlike. And like a lot of my poems, I began truly making sense of it later on. [Balloons] meant to be full of oneself, to float up, to not be grounded and to go where the wind takes you.”

This motif, this theme of ascension, is a unifying thread between Green Balloon and Red Balloon, and manifests uniquely in both. Ball illustrates this too, referencing the two albums’ disparate colors. “Green was childlike, it was naivety, money, and the curiosity of life. But ‘red’ is more mature. It’s more experienced, passionate; like ‘Look around, see what’s going on.’ It’s love, it’s thoughtfulness, it’s being driven. We knew [with Red Balloon] we were gonna explore a different side of ourselves, because we are childlike and silly and love music that sounds playful. But we’re also adulting, and it’s cool to write about that as well. And these songs, they’re very ‘grown up’ for us. That was the spirit of the album.”

“I see a woman and a man, her lover,” Ball further illustrates, describing this evolution her music has undergone, “And they’re just at a different point in their relationship, just a little more comfortable. They’ve had that argument and they’ve worked it out, and now they know how to fuss. It’s a little bit like that. There’s also the influences of how we grew up too—the Stevie Wonder, the Donny Hathaway…”

“No one really appears twice. We had a lot of people in and out of the studio,” explains Ball. Austin Brown, the son of Reebie Jackson and the nephew of Michael Jackson, receives a writing credit for Stolen Fruit. Lalah Hathaway, an exemplary artist in her own right, is the daughter of the late Donny Hathaway. “All these prodigies, all these child stars, really trying to make their own mark, after walking in such giant footsteps. But I think that that’s what their families would have wanted for them, to keep going on. I know my dad wanted it for me.”

Other names that come up during the conversation include Evan Ross, Sheila E., Austin Brown, Jamison Ross, Jacob Collier, and Wayne Brady. Also featured are New Orleans’ own Trombone Shorty and Big Freedia.

Considering all the amazing tracks on Red Balloon, each with its own story, I ask if Ball has a favorite song on the album.

“I love so many of them, but Stolen Fruit is just so special to me. I just happened to walk out of the studio, and I meet somebody who I’d seen earlier in the studio, and he was waving at me and saying, ‘Hey, come over here, come talk to me!’ and I’m like, ‘Wazzup?’ And he’s just talking to me, and it turns out, he’s Michael Jackson’s nephew, Reebie Jackson’s son. And he sounds just like Michael Jackson, which was very eerie in the studio and amazing. As we’re talking, we decide, ‘Let’s write a song.’ “

The conversation which began the song was centered on the Black experience in America, a theme which several tracks on the album tackle. The lyrics of the piece convey a point that Ball reflects on: the feelings of displacement and dehumanization which the first enslaved Africans felt, from the slave ships to the plantations. Ball likens the concept of fruit, stolen from its native land and forcibly transplanted, to the Black experience in present-day United States, where the echoes of this brutality are still felt by the descendants of the stolen. She elaborates, “I don’t think people really grasp what we’ve been through. They’ll say, “Oh, we’re in America, you’re free now, you’ve had a Black president, get the fuck over it.’

“But when you really think about it, when you really think about the language that was stolen and beaten out of you—the fact that you can’t even say hello in your native tongue… Or the fact that you have family all over the world that you don’t even know, that your great-great-great-grandmother had a sister and they took her away, and she never met her again… And you can imagine taking a trip overseas but you can never go back home. That’s huge, that we never went back home! And you have to talk about that, and that’s what ‘Stolen Fruit is about.”

It’s a poignant message delivered amidst a joyful picture of a young boy connecting through movement with red-robed ancestors, surrounded by bright colors and sunlight. These images appear in the music video which accompanies the song, directed by Sontenish Myers. The choice to feature such jubilant imagery was highly intentional. “Because we have survived,” Ball clarifies, “and you can't forget that part. The survival, the still-blossoming, the still-living. Finding beauty and joy and love with all of that tragedy. That's what it means to be black in America, honestly.”

Red Balloon, ultimately, feels like a coming-of-age. Using the familiar warmth and energy that the Bangas’ fans have come to expect, it addresses themes of existentialism, identity, and growth. The vibrance fans love is certainly still there, but now there’s a boldness, a grace, that really does make one think of the color red.

Updated about 22 hours Ago