This project is part of the Moving New Orleans Bikes initiative to create 75 miles of protected and interconnected bikeways. 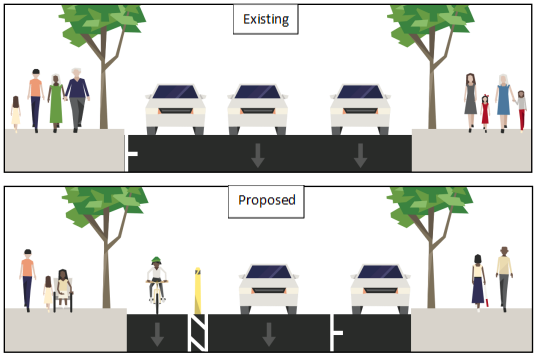 The City of New Orleans Department of Public Works contractor Pavement Markings will begin work on a safety project to reconfigure North Miro Street as a protected bike lane, general travel lane, and parking lane, from AP Tureaud Avenue to Ursulines Avenue, starting next week, weather permitting. Temporary daytime interruptions in traffic flow should be anticipated, but the street will have one lane of traffic open. Temporary traffic control devices such as cones and barricades will be in place to guide roadway users.

The work, which will start at AP Tureaud Avenue and continue upriver to Ursulines Avenue, will include a new lake-side protected bike lane and the striping of a relocated parking lane on the river side of North Miro Street. Minor additional work between Ursulines Avenue and Orleans Avenue will refresh and enhance existing shared-lane markings. (Construction between AP Tureaud and Franklin avenues will be coordinated with roadway repairs later this year.)

This project is part of the Moving New Orleans Bikes initiative to create 75 miles of protected and interconnected bikeways.

A total of 642 crashes were recorded on North Miro Street over a five-year period (2014-2018), resulting in the injury of 610 people. Most crashes occurred at Elysian Fields Avenue (185) followed by Franklin Avenue (55) and Esplanade Avenue (47). There were 13 crashes involving pedestrians and 14 crashes involving bicyclists.

Residents have been informed of the changes through community meetings in early 2021, engagement and outreach efforts in the fall and early winter 2021, and canvassing in the neighborhood in December 2021 and January 2022.

Updated about 19 hours Ago