Monthly circus arts showcases return to Cafe Istanbul, free to the public and great for all ages. 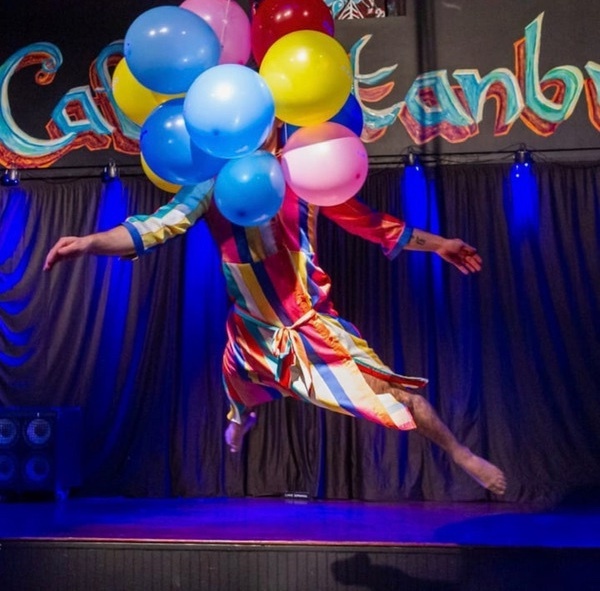 After a few months’ hiatus, courtesy of the pandemic, Fly Movement Salon has finally returned to Cafe Istanbul for monthly showcases. These Salons are free to the public and take place on the first Tuesday of the month, beginning at 8 pm. The Salon is put on by Fly Circus Space, New Orleans’ home for the circus arts.

For those unfamiliar, the Fly Movement Salon is a bona-fide variety hour which celebrates the creativity of Fly Circus’ many students as well as unassociated acts proffered by artists in the community. The showcase I attended was a unique and entrancing display of aerial silks, aerial hoops, and trapeze. Like everyone else in the room, I was amazed at the strength, skill, and fortitude demonstrated by the performers, who ranged in age from late-fifties to early high-school. In a permanent art installation like New Orleans, one never stops being amazed by the talent and dedication of the locals, and these circus-artists were no exception. By the curtain call, I and my fellow spectators were on our feet in a standing ovation.

A few days later, I was lucky enough to sit down with several of the people who make the Salon happen: Liza Rose, who founded Fly Circus back in 2015; LM, an executive producer of the Salon and managing director of Fly Circus; and Cody Hayman, the Salon’s foremost rigging operator and on-site MC. Besides their administrative duties, these powerhouses also serve as coaches for Fly Circus’ students. How lucky were we at NOLA.Today that we could sit down for coffee with them and hear their story? I’d be lying if I said I didn’t spend our interview feeling a little bit starstruck.

And what a story it is.

Rose, a professional circus artist, began the Salon in 2015 shortly after moving to New Orleans the year before. Fly Circus Studio came to be a year later. Several times, the studio was forced to change locations due to outside circumstances; the most devastating of which was the pump failure of 2017. “Our studio flooded,” recalls Hayman, who’d joined the project alongside LM after the two of them relocated from Asheville, North Carolina. As Liza Rose was teaching in Barcelona during the storm, Hayman was watching the space. “We had to wade through thigh-deep water to save the equipment.”

But neither hell nor high water could keep down Fly Circus, and baptized by fire, the three friends soon found a permanent space for their art and their students at 4820 Calliope St., where classes, an open gym, and summer camps are offered to the public. Much like the Salons, these service are newly returned after being mitigated during the pandemic.

Despite the challenges brought on by the threat of COVID-19, classes continued at a limited capacity per the city's guidelines. To everyone’s excitement, though, many of the existing students continued to improve, and what’s more, new students were joining Fly Circus as well. Many of these were youths, home from school, looking for ‘quarantine projects’ to help pass the time.

Rather than showing their students tricks and asking them to repeat them, the classes at Fly Circus all stress theory, fundamentals, and technique. Students are taught how to safely engage with the discipline of their choosing and encouraged to be creative in how they perform. Appropriately, the students who perform at the Salon all write their own choreography. “Our students will come up to us asking, ‘Is this a thing? Have you seen this before?’ in reference to a technique they’ve come up with,” LM explains. “Sometimes it is a new technique they’re showing off, and even when it isn’t, it still comes with their own unique style in their performance.”

“We still do that with each other,” comments Rose, smiling.

New Orleans is a city defined by its culture, and a huge part of that culture is performance. And in a city that’s famous for its musical and culinary exploits, celebrations of the small-but-thriving circus arts community can be tricky to find. The monthly Fly Movement Salon aims to make this art form more accessible to a wider public and maybe even draw in some new acts for the future.

“I’m adamant about the shows being free,” says Liza Rose, who stresses that a ‘low pressure, high art’ environment is tantamount to Fly Movement Salon—hence the project’s tagline. “I want artists—musicians, actors, dancers, circus artists, performance artists—to be able to experiment at the Salon without the pressure of everything having to be perfect, because the audience paid to see them. We value creating a safe space for developing artists and works in progress.”

Whether you’re a proud spectator looking for a fun evening out, a performer yourself looking for a new outlet, or (like me) someone looking to dip your toes into the circus arts, be sure that the next Fly Movement Salon is on your calendar. In the meantime, more information on classes, camps, and shows are available at Fly Circus’ website, flycircus.space.

Updated about 16 hours Ago